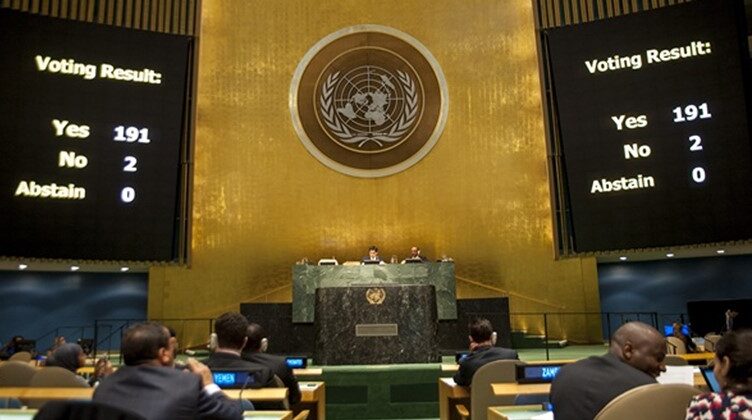 Every year at the UN General Assembly in New York, a resolution is voted on that calls for the lifting of the economic, trade and financial blockade imposed on the island by the USA for almost 60 years. For years it has been adopted by the overwhelming majority, with few dissenting votes and abstentions. Most clearly in 2016 with 191:0, when even the Obama administration did not speak out against the resolution. Since Trump’s presidency, the situation has also deteriorated at the UN. In the last vote of 2019, the United States, alongside Israel, also got Brazil to vote no and Colombia and Ukraine to abstain, with a still overwhelming acceptance of the resolution of 187:3.

The member states of the EU, including Germany and Austria, as well as Switzerland, have been voting against the blockade for years and condemn its extraterritorial expansion, which also affects European companies and institutions. Irrespective of this, Trump and his hardliners regularly intensify this sanctions policy against Cuba and other countries, which violates international law. Some concrete examples:

There are further escalations in the important financial sector:

This policy of blockade has increasingly dramatic consequences for the population in Cuba: money transfers from family members are made impossible, external support for health projects is prevented, important medicines can only be imported in a roundabout way and are overpriced, the transport system has to be massively restricted. The evil intent behind US policy, announced as early as 1960 (!), is becoming more and more visible: “…to weaken economic life through economic dissatisfaction and hardship by refusing money and deliveries to Cuba with the aim of reducing nominal and real wages, to bring about hunger, despair and the overthrow of the government”.

The peak of the moral impoverishment of the current US regime can be seen with the corona pandemic: Despite its own problems, Cuba is sending 3,000 medical workers to 28 (including European) countries to help fight the Covid 19 pandemic. How is Washington reacting? Secretary of State and ex-CIA Director Mike Pompeo has dubbed this “human trafficking,” prompting hardliner Republicans to introduce legislation in Congress to pressure countries that have brought Cuban medical workers into the country.

European governments, meanwhile, content themselves with cheap words or remain silent and are not taking any action against the US blockade and its devastating effects on Cuba. We demand that the vote against the blockade in the 29th edition of the resolution in the 75th UN General Assembly is finally followed by concrete action: The crawling in Europe before the US right of the punch, which violates international law, must no longer be tolerated! Stop aggression against sovereign states in Latin America and elsewhere.

We are therefore calling for a major solidarity action for Cuba and against the blockade in the run-up to the next UN vote, which has been postponed to May 2021! Together we – Cuba solidarity groups, progressive organizations and media from Germany, Austria, Switzerland, Sweden, Denmark, Finland, Great Britain, Spain, France, the Czech Republic, Slovenia and other European countries – want to draw attention to the escalation operated by Washington to put pressure on the US administration and its European servants. With large posters, radio spots, advertising in newspapers and social media channels,

Get informed and get active!

Talk to other organizations, but also to acquaintances, relatives and friends about tightening the blockade and supporting the solidarity campaign.