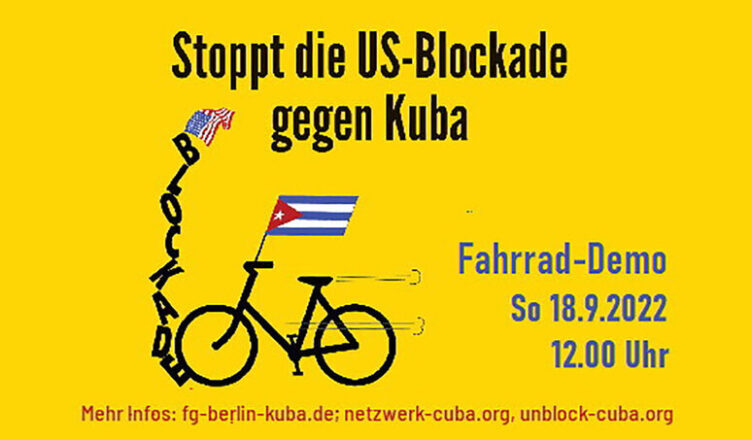 Before the UN General Assembly: Bicycle demonstration in Berlin against the US economic war against Cuba. A conversation with Jutta Kausch-Henken

The Berlin-Cuba Friendship Society is calling for a bicycle demonstration against the US blockade against Cuba on Sunday. What does the economic war against the socialist republic currently look like?

The US economic war against Cuba began in 1960 shortly after the revolution and is based on a law passed by the US during World War I. This means that the President can impose economic restrictions on countries hostile to the United States. Every president since Dwight Eisenhower has invoked this strange law and has maintained a brutal economic blockade for over 60 years, which has been tightened over the decades. The current President Joseph Biden made a big promise during the election campaign to improve relations with Cuba. Of course he didn’t do that, but signed a memorandum a few days ago that extended important parts of the blockade by another year.

What are the main consequences of this blockade for the Cuban people?

As a result, Cuba has great difficulty developing economically because a lot of social effort has to be devoted to alleviating the effects of the blockade again and again. All of life is affected. Even during the pandemic, shipments of protective clothing, medical supplies needed to make vaccines, ventilators, or just masks have been blocked by the US.

Is there a particular reason why you are calling for a bicycle demonstration this particular Sunday?

We decided on this date because the next vote in the UN General Assembly is due, in which an overwhelming majority will probably again vote to lift the blockade. It’s the second bike demo we’re doing. Over the past year, our tour of the city has enabled us to reach many people to spread the word about this shameful practice. We experienced great encouragement from passers-by and had good conversations.

The appeal states that the blockade not only affects the Cuban population, but also damages companies, associations and private individuals in the Federal Republic. Can you elaborate on that?

The US punishes anyone who dares to do business with Cuba despite threats. According to the Helms-Burton Act of 1996, US citizens can sue foreign companies in US courts for using property expropriated after the revolution. And the Secretary of State can ban people from entering the United States who do the same, e.g. B. run a hotel or a bar or whatever in a building that was owned by Bacardi or some other capitalist before the revolution. But the most blatant thing is that although the EU prohibits compliance with this Helms-Burton law, most companies still allow themselves to be forced. Because they are afraid that otherwise they will no longer be allowed to do business with the USA or that they will have to pay a fine. This even applies to banks.

What is the traffic light government’s position on the blockade, and what demands do you have on Foreign Minister Annalena Baerbock from the Greens in this regard?

Well, Germany also votes in the UN every time against maintaining the blockade. But no action follows. We keep asking for this, but so far without success. I don’t think Ms. Baerbock even knows where Cuba is. She’s always in Ukraine and has to ruin Russia.

And how should the bike demo work?

After a short rally in front of the Cuban embassy, ​​which starts at twelve o’clock and where Ambassador Juana Martínez González also welcomes us, we cycle to the US Embassy. There, on Pariser Platz, the final rally will take place.