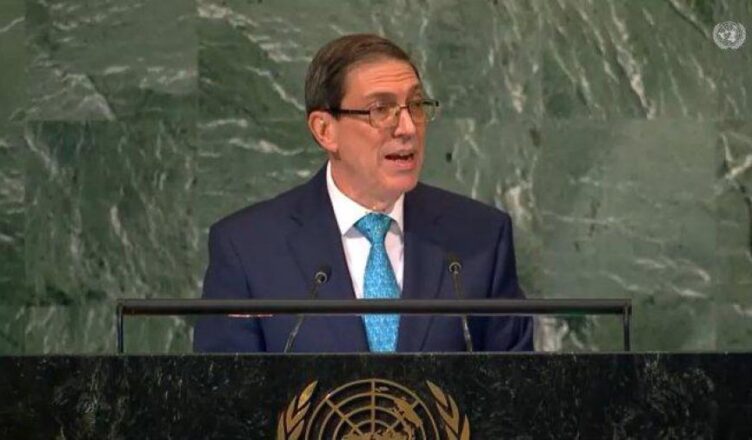 Speech by the Minister of Foreign Affairs of the Republic of Cuba, Bruno Rodríguez Parrilla, at the General Debate of the High-Level Segment of the United Nations General Assembly. New York, September 21, 2022.

The impact of the COVID-19 pandemic has exposed, as never before, the true essence of the prevailing unjust and unsustainable international order.

Never before has humanity had this formidable scientific and technical potential, nor this extraordinary capacity to generate wealth and well-being, and yet never before has the world been so unequal and inequity so profound.

Eight hundred and twenty-eight million people, 10% of the world’s population, suffer from hunger, and nearly 50 million children suffer from wasting, the deadliest form of malnutrition.

Unemployment will affect 207 million people in 2022, 21 million more than in 2019. In the midst of the fourth industrial revolution, 773 million human beings cannot read or write.

Nearly 6.5 million people have died due to the HIV/AIDS pandemic. Vaccines to deal with it are inaccessible to one billion people in low-income countries. In 2021, pharmaceutical transnationals earned 84,588 million dollars.

The foreign debt has been paid several times over, but it multiplies. Paradoxically, world military spending is growing at a dizzying rate and exceeds two trillion dollars for the first time.

There is no justification for humanity to continue to be threatened by the existence of almost 13,000 nuclear weapons. We advocate the universality of the Treaty on the Prohibition of Nuclear Weapons.

How much more could we do if those resources were devoted to promoting health and development? How many deaths from COVID-19 and other causes could have been avoided? How many children would be saved from hunger and preventable or curable diseases?

Greenhouse gases recorded record concentrations in 2021, and will be the same in 2022. The average sea level has reached a new high. The last seven years are the warmest on record.

We cannot continue to ignore the alarm bells that warn of impending climate catastrophe. We have only one Earth, the only home for all of us. We must act without further delay.

The “philosophy of war and dispossession” and the irrational patterns of production and consumption of capitalism will lead to a catastrophe.

International relations are on a very dangerous path. The U.S. offensive aimed at subjugating States by means of threats and economic, military and political-diplomatic coercion, in order to subject them to an order based on its capricious rules, together with the expansion of nato and the development of an aggressive doctrine and fifth-generation unconventional warfare, inevitably lead to a climate of tension and conflict, the consequences of which are unpredictable.

Cuba, a small island developing state, has paid a high price for defending its legitimate right to exist as a sovereign and independent nation.

For more than six decades we have resisted a ruthless and unilateral economic, commercial and financial blockade intensified in the extreme, to unprecedented levels since 2019 and during the pandemic.

Thirty years after the first resolution of this Assembly against the blockade, the Government of the United States continues to ignore the almost unanimous demand of the international community to cease its illegal and cruel policy against Cuba.

It persists in its efforts to generate material shortages, scarcity and suffering, to sow discouragement and dissatisfaction and to cause harm to the Cuban people.

The U.S. Government reinforces pressures on governments, banking institutions and companies around the world interested in having relations with Cuba, and obsessively pursues all sources of income and foreign currency inflows to the country, in order to provoke economic collapse.

As a result, the Cuban economy has experienced extraordinary pressures, which are manifested in industry, services, food and medicine shortages and the deterioration of the level of consumption and general welfare of the population.

The human damage caused by this policy to all Cuban families, which is impossible to quantify, is enormous, cruel and immoral.

The blockade is an act of economic warfare in peacetime.

The current government of the United States maintains in force the most aggressive pressure measures against our country adopted by the government of President Donald Trump.

The unjustified inclusion of Cuba in the arbitrary and unilateral list issued by the State Department of countries that allegedly sponsor terrorism continues.

This slanderous classification imposes a stigma on our entities and institutions, and makes financial and commercial transactions and the possibilities of payments and credits extremely difficult.

Cuba, which has been a victim of State terrorism, does not and will never promote terrorism. On the contrary, we condemn it in all its forms and manifestations.

Double standards, incoherence, selectivity and political manipulation damage the cause of human rights.

The previous speech of the Czech Chancellor, who does not dare to mention the crime of the blockade against Cuba, is a sad example.

We have clearly alerted the Government of the United States that the factors that encourage irregular migration and cause loss of life must be solved, such as the non-compliance, on its part, since 2017, of its obligation, according to the bilateral agreements in force, to grant no less than 20,000 annual visas for migrants; the existence of the Cuban Adjustment Act, the privileged treatment with political motivation, the restrictive pressures on countries of regular transit, and the reinforced economic blockade.

Today’s announcement that the processing of migrant visas will return to the U.S. Embassy in Havana is a positive step.

Cuba reiterates its willingness to move towards a better understanding with the Government of the United States, and to develop civilized and even cooperative relations between both countries, on the basis of mutual respect, sovereign equality, and without undermining our independence and sovereignty, in spite of profound differences.

We highlight the valuable commitment and the recent demonstrations of Cubans and Cuban descendants in all latitudes and in this country, of respect for the sovereign rights of Cuba, and the rejection of the ruthless aggression of the United States, particularly the economic blockade.

I am also deeply grateful for the statements made by heads of state and government in this general debate, the historic support of this Assembly and the expressions of solidarity towards Cuba by governments, personalities, political organizations and solidarity, social and popular movements from all over the world.

Today, that solidarity and support continue to be essential.

Despite the enormous challenges, the Cuban people and Government have not ceased in their determination to advance in the construction of a more just, democratic, prosperous and sustainable socialist society.

We overcame COVID-19 with resources, our own vaccines, and the strength of our public health and science system. We were able to collaborate modestly with the sending of 58 medical brigades, at the worst moment of the pandemic, to 42 countries and territories.

We worked to recover the country’s economic and social life, to support the transformation of our communities, and to sustain and expand social programs.

We continue to improve our legal system, our socialist state of law and social justice, to ensure the full enjoyment of all human rights by all Cubans, and to enrich the system of social justice that several generations have enjoyed.

On September 25, after a broad process of participation and popular consultation, the legislative referendum on a new and inclusive Family Code will take place. It will be an exercise of genuine direct democracy and effective power of the Cuban people.

The “unity in diversity” proposed by then President Raul Castro, is possible in the countries of the South and the Community of Latin American and Caribbean States, which is growing stronger and stronger, and is creating the conditions for our region to advance towards higher forms of integration and cooperation, based on the postulates of the Proclamation of Latin America and the Caribbean as a Zone of Peace.

We appreciate the dignified stance taken by several countries of our region in the face of arbitrary exclusions in hemispheric forums.

We renew our support and solidarity with the Bolivarian Republic of Venezuela, its constitutional president, Nicolás Maduro Moros, and the civil-military unity of its people, in the face of attempts to destabilize and subvert the internal order of that brotherly country. We reject the application of unilateral coercive measures against Venezuela.

We denounce the imperialist attempts to destabilize the Government of Reconciliation and National Unity of Nicaragua. We reiterate our firm support for the brotherly Nicaraguan people and its president, Daniel Ortega.

We stand in solidarity with the sister nations of the Caribbean and support their legitimate demand for reparations for the harmful effects of colonialism and slavery. They need and deserve to receive fair, special and differentiated treatment.

We reaffirm our historic commitment to the self-determination and independence of the people of Puerto Rico.

Haiti needs a special contribution from the international community for its reconstruction and development. Humanity owes a debt to that foundational Republic.

We support the legitimate claim of President Alberto Fernández and the people of Argentina to sovereignty over the Malvinas, South Sandwich and South Georgia Islands and the surrounding maritime areas.

We express our full solidarity with the Argentine Vice President, Cristina Fernández de Kirchner, who, victim of unjust and unfounded judicial and media harassment, recently suffered a vicious assassination attempt.

We reiterate our firm commitment to peace in Colombia. The manifest disposition to peace of the current President Gustavo Petro, and of the parties concerned, deserves the support of the region and the international community.

The necessary resources must be provided to support the African Union’s Agenda 2063, which sets the roadmap for the development of this sister continent.

We advocate the search for a peaceful and negotiated solution to the situation imposed on Syria, and demand the cessation of external interference and full respect for its sovereignty and territorial integrity.

We support a just, comprehensive, and lasting solution to the Middle East conflict, which guarantees the real exercise of the inalienable right of the Palestinian people to build their own State within the pre-1967 borders, with its capital in East Jerusalem, and the end of the Israeli occupation of the occupied Palestinian territories.

We reaffirm our unwavering solidarity with the Saharawi people.

We reject the unilateral coercive measures imposed on the Islamic Republic of Iran.

We condemn the imposition of unjust unilateral economic measures against the Democratic People’s Republic of Korea and external interference in its affairs.

We oppose interference in the internal affairs of the Republic of Belarus.

We reaffirm our rejection of the imposition of unilateral sanctions against the Russian Federation.

We condemn the unfounded smear campaigns against the People’s Republic of China and attempts to harm its territorial integrity and sovereignty. We reiterate unwavering support for the principle of One China.

We advocate a serious, constructive and realistic diplomatic solution to the current war in Ukraine, by peaceful means and in adherence to the norms of international law, which guarantees the security and sovereignty of all.

Cuba will continue to raise its voice to reject domination and hegemonism, unilateral coercive measures, genocidal blockades and the pretension of imposing a unique culture and model on the world.

We will never renounce the defense of independence, sovereignty and self-determination of the peoples, without foreign interference or intervention.

For our glorious past, for the present and future of the new generations of Cubans, with the leadership of President Miguel Díaz-Canel, we will resist creatively and fight tirelessly until we achieve our dreams of peace and development, with equity and social justice for Cuba and for the world.

Thank you very much.