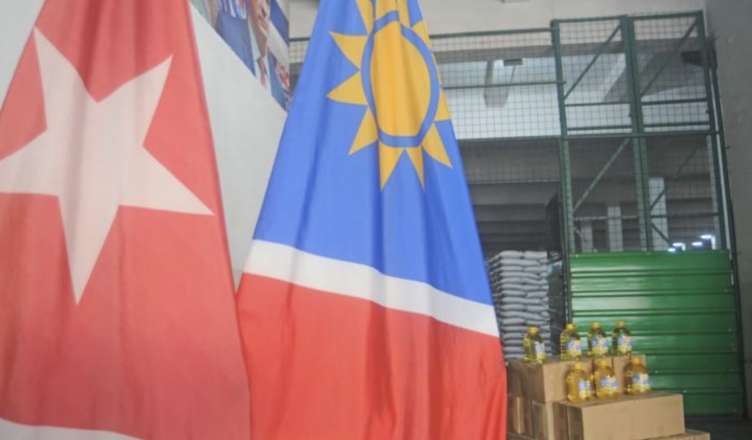 New donations from Namibia and Vietnam.

The President of the Republic of Namibia, Hage G. Geingob, praised the Cuban people’s commitment as a bastion of international solidarity with a greeting, which was read out by the Ambassador of the African country when a donation of cooking oil was made to the wholesale company Habana 1 of the Ministry of Internal Trade ( MINCIN ).

The President’s words refer to Cuba’s exemplary way of supporting the most harassed and oppressed peoples in the world, mainly through the medical brigades and the Henry – Reeve – contingent, specializing in disasters and severe epidemics.

„ Cuba has undoubtedly shown, that investing in social projects and in social development can be beneficial for both the national economy and the world in general, ”the letter said, recognizing the solidarity of the Caribbean island, such as the liberation of countries such as Angola and the eradication of the colonial system of apartheid.

President Geingob adds that Namibia is aware of the coercive measures that lead to harsh economic conditions for the Cuban people, and therefore calls for the lifting of the criminal and inhumane economy -, trade – and financial blockade imposed by the United States.

The donation, consisting of 20,955 liters of cooking oil, divided into 4,191 five – liters – containers, was motivated by the accidents at the Saratoga Hotel and in the Matanzas fuel store, the communication said.

The First Deputy Minister for Foreign Trade and Foreign Investment, Ana Teresita González Fraga, said this gesture by the government and people of the African nation confirms the unbreakable friendship that unites us, „ and the will of both countries to expand and deepen bilateral relations”.

She recalled Namibia’s position to support Cuba in the UN, the African Union and the SWAPO – congresses to call for the blockade to be lifted.

VIETNAMESE WORKERS TRUE A WORKING DAY TO KUBAS SUPPORT IN

The workers of the Vietnamese company Thai Binh Global Corporation, based in the special zone Mariel ( ZEDM ), donated a daily contribution, to buy supplies and food for the victims of the major fire in the Matanzas fuel store.

According to a report by Cuban television, the director general of ZEDM – branch, Vi Nguyen Phuong, came to the western province with a donation that includes food and other relief supplies such as disposable diapers and wet wipes.

The products are located in a special warehouse, from where the modules for those affected are put together, which include sunflower oil, meat – and canned fish, rice, beans and cereals.

The heads of the Vietnamese company also visited some affected families to give them the first donations as a sign of solidarity.

The deputy governor of this province, Marieta Poey Zamora, accepted the certificate of proof of the donated products.

This is the second donation from the Thai Binh Global Corporation after the Matanzas incident. The previous one was a financial donation of $ 100,000, in addition to 53,000 units of food such as milk, rice and fruit juice.

The Cuban people are a stronghold of international solidarity