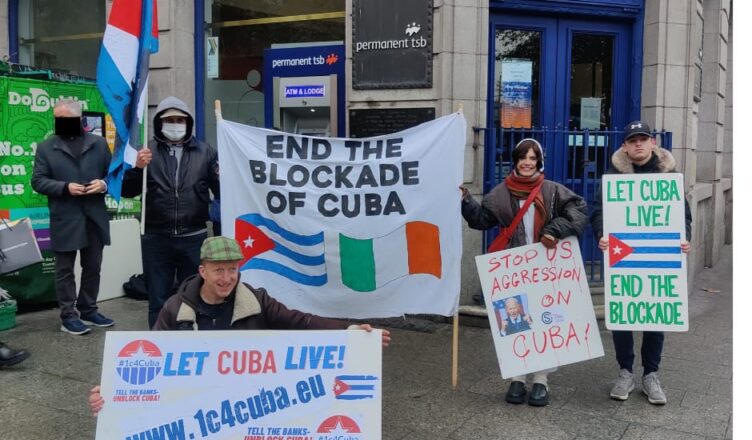 On 17 December, to mark the 8th anniversary of the release from prison of the Cuban Five,
participating organisations of the 1c4Cuba campaign took part in a global day of action against
banks that enforce the illegal blockade of Cuba. Activists in Britain, Canada, Ireland and
Switzerland took action on the streets to demand an end to the blockade.

In Britain, supporters of Rock around the Blockade picketed banks including Lloyds Bank,
Metro Bank and Royal Bank of Scotland because they have blocked transactions that reference
Cuba and even closed customers’ bank accounts after they sent or received such transactions.

In Canada, Vancouver Communities in Solidarity with Cuba (VCSC) held a ‘Vigil to End the
U.S. Blockade on Cuba’. Organisers and supporters connected with shoppers and passers-by
in downtown Vancouver urging them to sign a new postcard to US President Biden urging him
to remove Cuba from the ‘State Sponsors of Terrorism’ list. A newsletter with information on
the 1c4Cuba campaign was distributed. VCSC was specially joined by Carlos Lazo, founder
of the US campaign Puentes de Amor (Bridges of Love).

Cuba Support Group Ireland held a picket of the bank branch of Permanent-TSB in Dublin.
Permanent TSB customers have had a number of transactions to UK and Belgian bank accounts
blocked because they included the reference ‘Cuba’. These transactions were blocked even
though they were between one European bank to another.

The Switzerland-Cuba Association took its criticism to the streets and Helvetiaplatz in Bern,
the federal capital, holding a protest with the slogans: “USA – End of the Blockade of truth
now” “FAIRPLAY FOR CUBA”, “CUBA – A small island, a great people”.

This was the first internationally coordinated day of street protests by the 1c4Cuba campaign.
The successful organisation of protests across a number of countries indicated the growing
strength of the campaign. If you or your organisation want to join our next actions, get in touch
to get involved.